Your Guide to Types of Coffee 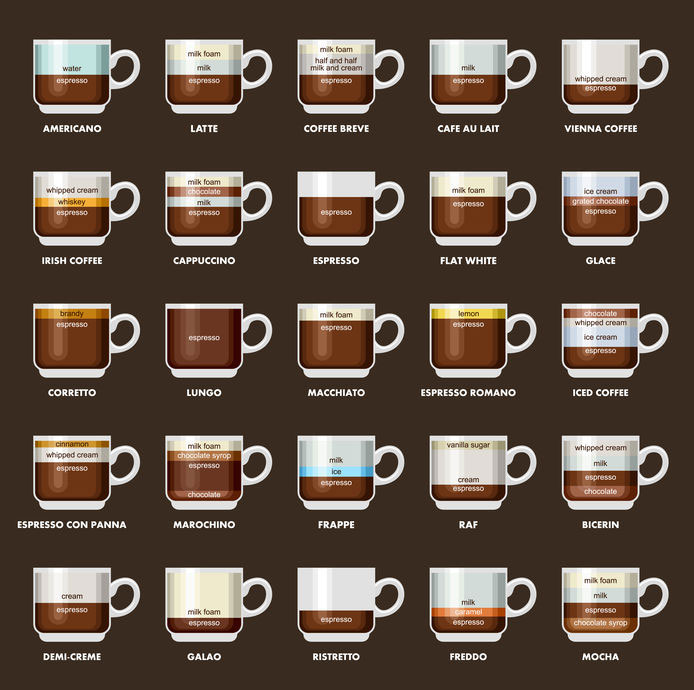 Ever been to Starbucks and overheard that someone ordering that Caramel Double Espresso Frappuccino Decaf and felt a little nervous?

Coffee menus can be overwhelming to many, even the hardcore coffee enthusiasts sometimes! With gazillion options on their flashy menus, it’s hard to decide which one to choose.

Do you know what’s even harder? Feeling satisfied with what you ordered and resisting the feeling that you’re missing out a better drink!

Not only it makes you alert and helps you kick start your day. Starting my day with the perfect cup of coffee wakes up my brain cells. Just the aroma of freshly brewed coffee can make me happy!

Three ingredients; espresso, milk, and foam. Mix and match them with different ratios and you get a dozen coffee types with unnecessarily complicated names.

Adding extra fluffy chocolate, caramel, hazelnut, or even marshmallow toppings, you feel like you’re truly digging yourself into a hole when you try to keep up with all these variations.

To set it upright, let’s start with some basic coffee terminology.

The whole process starts with the coffee beans, of which there are three main types; Robusta, Arabica, and Liberica.

The former two are more common though. Robusta has the highest caffeine content, while Arabica is the most dominant type.

These beans are naturally green and they’re stored as they are to preserve their taste and aroma. To change them into the well-known beloved crunchy brown beans, they must be roasted.

The roasting degree determines the strength, taste, and aroma of the resulted coffee.

Pouring hot water over the resulted roasted coffee grounds and leaving the mixture to brew is what’s called ‘Coffee Brewing’. It can be done using a filter, a drip, a french press, or a percolator.

Using an espresso machine for brewing coffee beans is obviously how you get espresso. 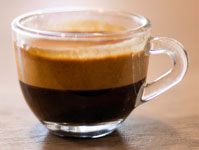 The infamous coffee base can be enjoyed by itself!

A small cup of espresso is a result of pressuring water strongly over fresh ground coffee. Quite a minimal drink, but it’ll get you going through the day.

Adding a small amount of warm milk to a shot of espresso to curb its acidity, served in a small-sized cup, this is Cortado.

In Latin America, it’s one of the most popular afternoon drinks.

Two shots of espresso are called a Double Espresso or a ‘Doppio’. Aim for that if you’re having a hard day ahead!

Unlike its name suggests, a Piccolo Latte is just a regular shot of espresso with some foamed milk on top. Usually, it runs by the name: Macchiato.

Another common distinction among Macchiatos is short and long ones. This depends on the number of espresso shots, a short macchiato has one shot, while a long one has two shots.

A well-known trick to evaluate your macchiato is the rule of thirds, which indicates that for a perfect cup of macchiato, the lower third should be of dark pure espresso, the upper one should be pure milk, and the middle one a mix between the two.

You should be able to distinguish the three layers easily.

Most of the time this is done by turning off the espresso machine before it starts to get lighter -this being the espresso.

A shot of espresso added to hot water. That’s all it takes to make a decent cup of cafè Americano. Best served black, yet some people like to add milk and/or sugar to it.

As you might realize the name Cafè Americano is actually Italian. The story goes back to World War 2 when American soldiers in Europe weren’t used to strong European espresso, so they used to dilute it by adding water.

With only two ingredients to make it you’d think there’s no debate around how to make Americano. But actually, there is.

In which order should you put water and espresso?

The agreed-upon order is that you put espresso first, then pour water over it to dilute it. Reverse this order and you get what we call a ‘Long Black’.

Long Black is basically Americano made in a different order. In which you put water first then add 1 or 2 espresso shots to it.

Usually, it’s stronger than regular Americano and it has more ‘crema’ on top.

The difference is minimal, that’s why you’ll find a lot of people using their names interchangeably.

Brewing a Lungo is the same as espresso but taking more time to pull than normal espresso and using more water. With longer extraction time, more water passed through the coffee ground, resulting in a bigger cup of coffee and the taste is more bitter but milder than espresso.

A single shot of espresso added to steamed milk will get you a Latte. A fairly popular option among coffee lovers. Usually, the coffee milk ratio here is 1:3 or 1:5 plus some foam.

Latte is a nice option for people who don’t regularly drink coffee but in need of a caffeine shot. The abundance of milk and sugar in it helps lighten the bitter taste of the coffee. But it means more calories too.

Keep in mind that Latte is milk in Italian, that’s why we call this a cafè latte. There’s a tea latte as well.

Many people don’t feel that there’s much difference between a Latte and a Cappuccino. But, in fact, there is.

Cappuccino has more foam than a latte and it usually has some additives like chocolate on top. Besides, the coffee to milk ratios are different.

A staple in every coffee lover’s routine, possibly the most beloved coffee type out there. Yes, you guessed it right. Cappuccino!

A cappuccino consists of 3 layers, a shot of espresso, some steamed milk, and a frother layer. These layers are what give cappuccino the balanced taste and rich texture we love.

As you know, some like to sprinkle some cocoa powder on top. Maybe even add marshmallows, hazelnut flavor, or caramel syrup. It adds up to the taste, yet diminishes the real coffee.

It starts with a shot of espresso, on which a rather creamy layer of steamed milk is poured.

Pretty similar to a cappuccino, Flat White is pretty popular in Australia and New Zealand.

Some people think that there’s no difference between a flat white and a latte, but there is. The milk in flat white in not frothed, but it’s rather creamy and velvety. Also, it exists in fewer amounts. That’s why it’s stronger than a latte.

Off to the ‘cold’ options. Starbucks has introduced its ice-blended coffee, the Frappuccino, several years ago. Tasty and refreshing, with a touch of whipped cream on top. This beverage has been a crowd’s favorite since forever!

To break down its contents, it consists of a single espresso shot (can be increased upon request), some crushed ice, milk, and sugary syrup to blend in.

These ingredients are usually put into a blender to mix together and are served afterward.

Many people mistake frappuccino with iced coffee. Truth is that frappuccino is made with ice, unlike iced coffee which is regular coffee that’s served cold.

Here are some options that can be considered as ‘treats’ rather than strong ‘coffee’.

For me, an established coffee veteran, I don’t consider Mocha as real coffee. But rather a treat.

Mocha is basically a thick sweet latte with added chocolate powder and/or some sweet syrups. You’ll barely notice the bitterness of coffee.

Dieters out there, watch out. This is one of the rather calorie-dense coffee drinks with all the added chocolate and stuff.

Speaking of sugar. If you have a sweet tooth, this might be the one for you.

Vienna coffee is 2 espresso shots mixed with ‘whipped’ cream instead of regular milk. Just like cappuccino, it usually has some chocolate sprinkles on top.

A nice option for those who need the caffeine minus the bitterness.

Don’t be surprised if your barista doesn’t know how to make Irish Coffee. You’ll find Irish coffee in restaurants or bars rather than cafes.

What’s special about it? It adds whiskey to the mix.

Coffee is brewed with Irish whiskey and sugar. In addition to a thick layer of cream on top. It won’t necessarily kick off your productivity levels, but it sure will put you in a good mood!

Affogato can be barely considered as coffee. If you order it, you’ll get a scoop of vanilla ice cream or gelato with an espresso shot on top.

It could be appealing to many, but is it really coffee?

Some places might even add liquor to it. Beware if you’re having it in the morning!

Do Caffeinated Drinks Have to Include Espresso?

While the majority of the options available in coffee shops are espresso-based, you can enjoy the merits of coffee in different ways.

A few of them can be found below.

Turkish Coffee has a huge fan base in the Middle East. As the name implies, it originated from Turkey and flew all over the world in no time. Thanks to its unmatched taste and richness.

It’s basically Turkish Coffee ground added to water and sugar if needed. However, it requires a special copper/ metallic pot to make it.

The second most popular drink in the world after water is plain coffee. You just need to pick your favorite coffee grounds, heat some water, and choose your favorite pour-over or dripping method to make a decent cup of coffee.

It doesn’t take time nor effort to make. Also, ditching your barista can save you some money. However, you must know that a lot is on the line. The quality of the final product totally depends on your technique!

Milk and sugar are always welcome as additives.

There are probably a bunch of other less-known coffee types that I’ve intentionally eliminated from this list in order to focus on the most common ones.

Regardless of the name, there’s a multitude of factors that determine how your coffee cup will taste; the coffee beans, roasting type, and brewing technique. Finally, it all boils down to the barista’s method.

If you’re sure which type you like more, go ahead and experience different types for yourself. I can guarantee that there are more types than you can taste!